What an absolute nightmare of a season this has been..

So many sick, injured cats and kittens, horrendous injuries plus cancerous ears or noses eaten away BUT no need to show any photos, lets not dwell on any of those distressing moments we have far better news this time around.

First, mention of a little kitten found in a deep hole at the Turkish cemetery in Lindos handed over to us as the 175th fostered, cheeky little devil was luckily offered a Forever home with one of our terrific volunteer / feeders and will be set for life. Thank you Chris.

Secondly a large UK cat charity held their International conference here in Rhodes with over 400 vets & nurses participating. We were contacted by a French TNR group prior to the conference asking if they could help in any way, however after the seminars were finished GCWS-Rhodes had apparently been put on the map, receiving emails from vets contacting us as far afield as Dubai offering TNR assistance.

Unfortunately as we have reported in prior newsletters, the Greek system just does not work in our or foreign vets favour which is sad, unless we are prepared to pay expensive legal fees and translation of many papers & certificates required by Greek law, far too much bureaucracy for one week of TNR

Even so we had a very factual and precise write up from the ICC charity.

iCatCare’s veterinary division, the International Society of Feline Medicine (ISFM) recently hosted its annual Feline Medicine Congress in Rhodes. Veterinarians, veterinary nurses and technicians, behaviourists and other key industry members joined us from all over the world for four days of sun, sea, and veterinary science. The theme of the congress was ‘Feline Fine: How to create harmony between physical health and mental wellbeing in your treatment and management of feline cases.’  World-renowned experts in feline health and behaviour led discussions, lectures and interactive masterclasses on how to improve the care of cats, both owned and unowned, in the veterinary sector and beyond.

In between lectures and all the amazing social events, Claire Bessant and I took the opportunity to visit someone who we heard represented the perfect model for cat population management at a local level. We met up with Andrea Dampier at a Lindos café on a very hot afternoon to talk about her volunteering work. 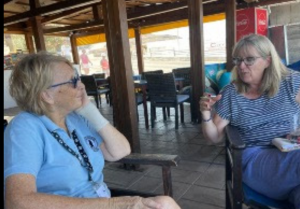 Andrea moved to Rhodes from Australia in 2012. As soon as she arrived, she noticed that there were cats everywhere – even her own house she had moved to there were 22 living around the property. This part of the island had traditionally been a poor area with no local vet, once the tourist season was over the cats were routinely poisoned to keep numbers down.

After Andrea had spoken with locals, she realised this was a long-term problem that would take some fixing. She started by trapping cats around her own house taking them to a vet to be neutered 40 minutes away, then her neighbours and others from her village. As the service became more sophisticated Andrea realised the only way TNR would work was by being mobile, area by area, village by village working with a vet team provided and paid for by the Greek Cat Welfare Society UK, to date covering 50sq kilometres with over 5000 unowned cats now sterilised.

Pefkos is a beach resort a few kilometres away from Lindos and Andrea was approached a while back by a restauranteur asking for her help: cats were fighting, biting children and taking food off the plates of tourists eating in the restaurant. He had heard she was doing great things and he knew she would help if she could. She now works in Pefkos as well as Lindos and the business owners and tourists all get involved in feeding and donating money which is put towards winter feeding when there are no tourists around.

While we were visiting Pefkos to see the feeding stations, a man on a scooter stopped to speak to Andrea, asking where the little kitten was that she had taken to the vet with an injured eye. We also met Yannis, a man in his seventies who had been feeding street cats for 10 years. This is just a small snapshot of how the community are working together to care for the unowned free-roaming cats. 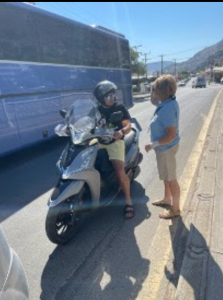 Andrea provides accommodation and transport for the vet teams ,plus GCWS UK assist with funds for flights from the UK to go over in November and March when they trap, neuter and return as many as 175 cats a week. Andrea understands the importance of strategic planning for her TNR and everything is organised a year in advance.

The cat populations of Lindos and Pefkos are now so well managed that Andrea will even make the decision to leave a few juveniles to have kittens to ensure that the tourists who love the cats so much get to see a good mix of ages.

The locals have become more educated about cat welfare, and children that have been taught to love animals tell other children. Now sick cats are rarely seen, thanks to Andrea and the team from GCWS -UK and the community of Lindos and Pefkos.

If you would like to support Andrea and her work, you can visit https://www.facebook.com/gcwsrhodes/ 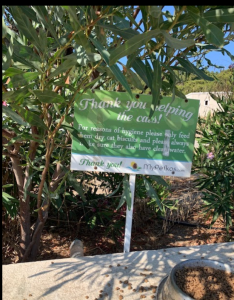 More good news as a UK T. Shirt company www.barteez.co.uk contacted us asking if they could design, print and sell good quality T. Shirts on our behalf with a donation paid for each sold. Actually we were delighted and over the past 3 x months they have deposited close to £100.

If interested go to the website or scan the QR code, choose between 4 x designs, pick the town you would like on your shirt Pefkos, Lindos, Rhodes or Greece and it will be delivered to your door.

THANK YOU once again for your continued support.

We use cookies on our website to give you the most relevant experience by remembering your preferences and repeat visits. By clicking “Accept”, you consent to the use of ALL the cookies.
Cookie settingsACCEPT
Manage consent

This website uses cookies to improve your experience while you navigate through the website. Out of these, the cookies that are categorized as necessary are stored on your browser as they are essential for the working of basic functionalities of the website. We also use third-party cookies that help us analyze and understand how you use this website. These cookies will be stored in your browser only with your consent. You also have the option to opt-out of these cookies. But opting out of some of these cookies may affect your browsing experience.
Necessary Always Enabled
Necessary cookies are absolutely essential for the website to function properly. This category only includes cookies that ensures basic functionalities and security features of the website. These cookies do not store any personal information.
Non-necessary
Any cookies that may not be particularly necessary for the website to function and is used specifically to collect user personal data via analytics, ads, other embedded contents are termed as non-necessary cookies. It is mandatory to procure user consent prior to running these cookies on your website.
SAVE & ACCEPT